THE SEDIMENT
OF MY LIFE

WE KNOW THAT THE SEDIMENT REPRESENTS “WHAT REMAINS AT THE END”…

DAY AFTER DAY WE DRAW THE TRACES OF WHAT WE WILL LEAVE BEHIND, AND IT IS IN THE UNCER- TAINLY OF THE FUTURE WHERE WE CAN VALUE THE PRESENT, EACH STEP IS IMPORTANT; IF WE ARE CONSCIOUS OF IT, THE TRAVELED ROAD WILL BE MIRÍFIC! 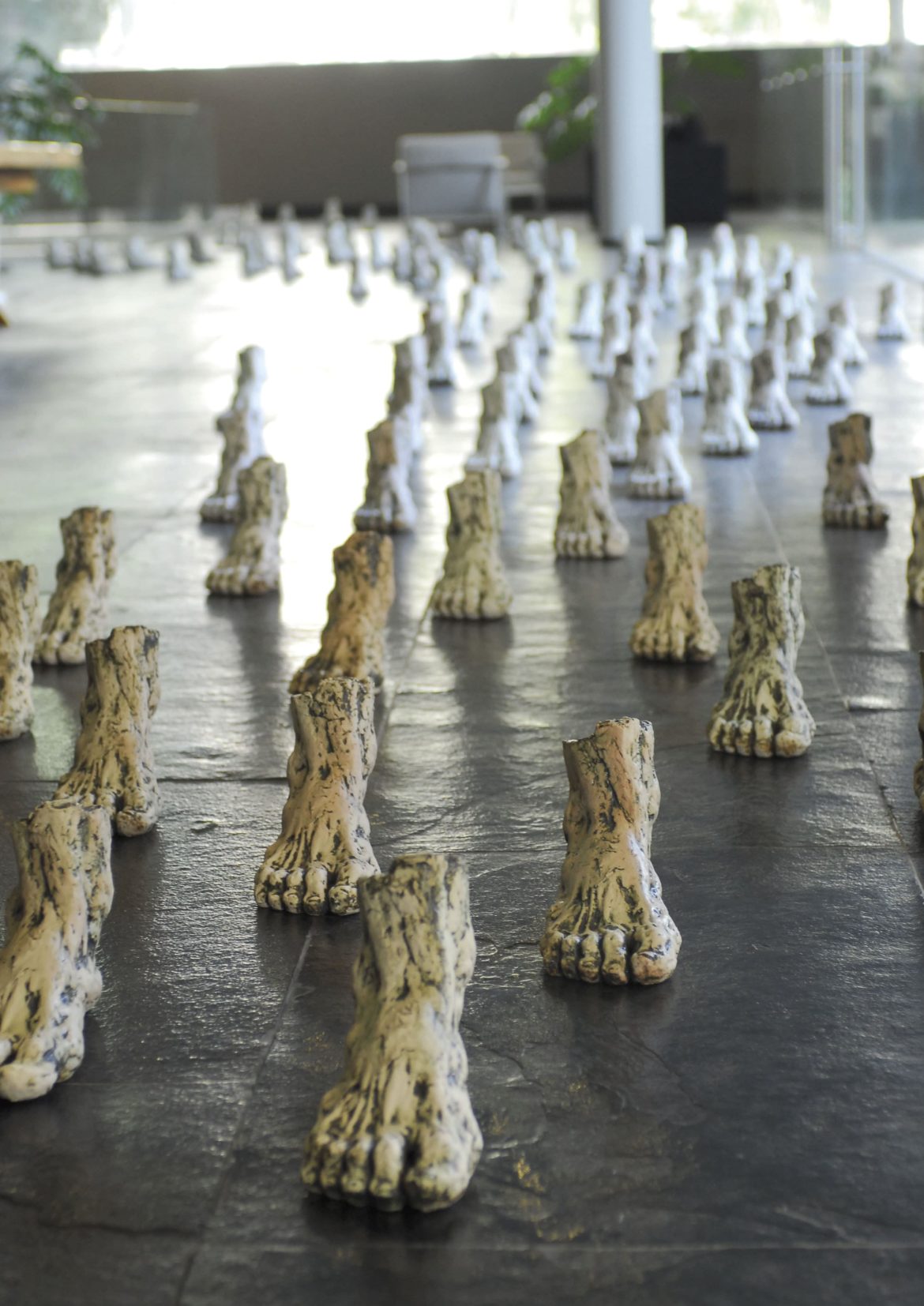 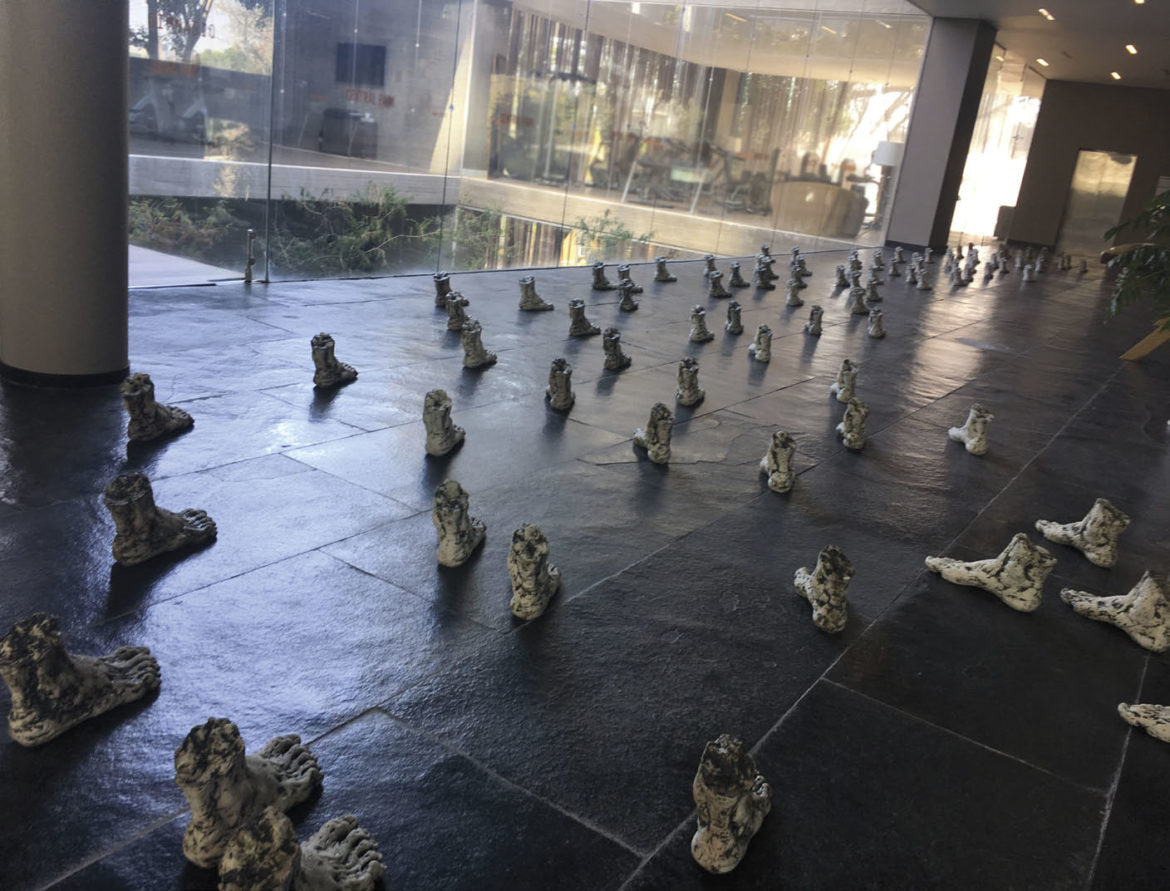 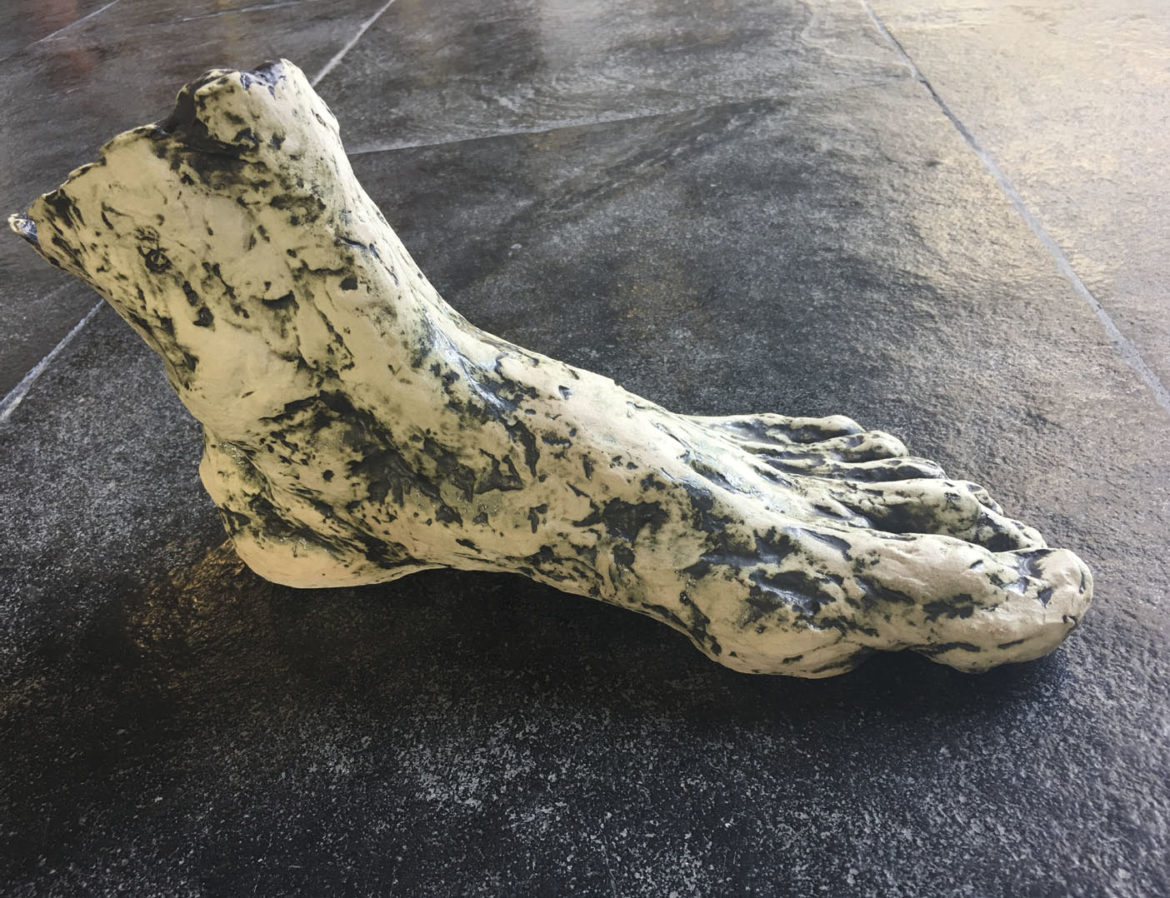 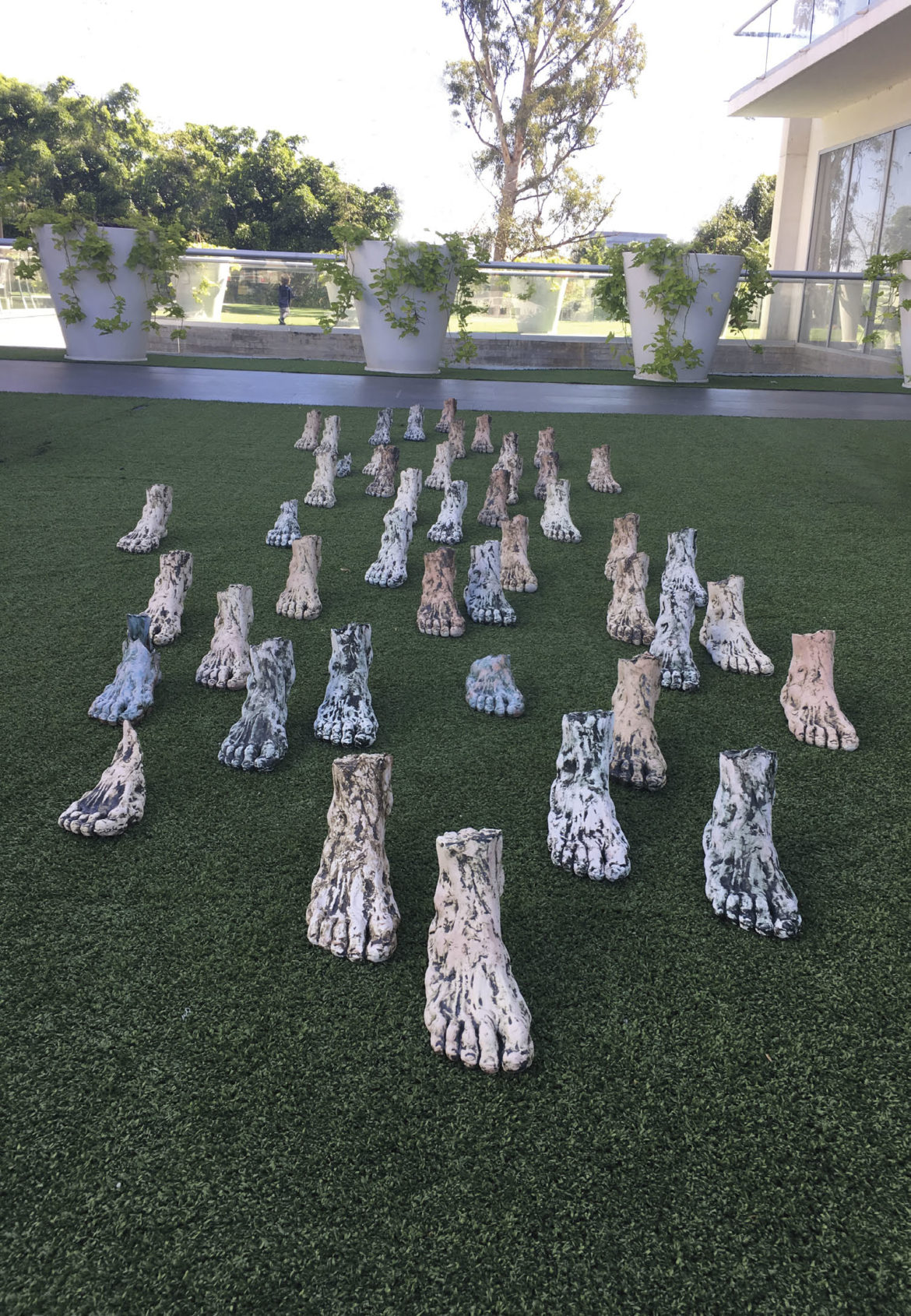 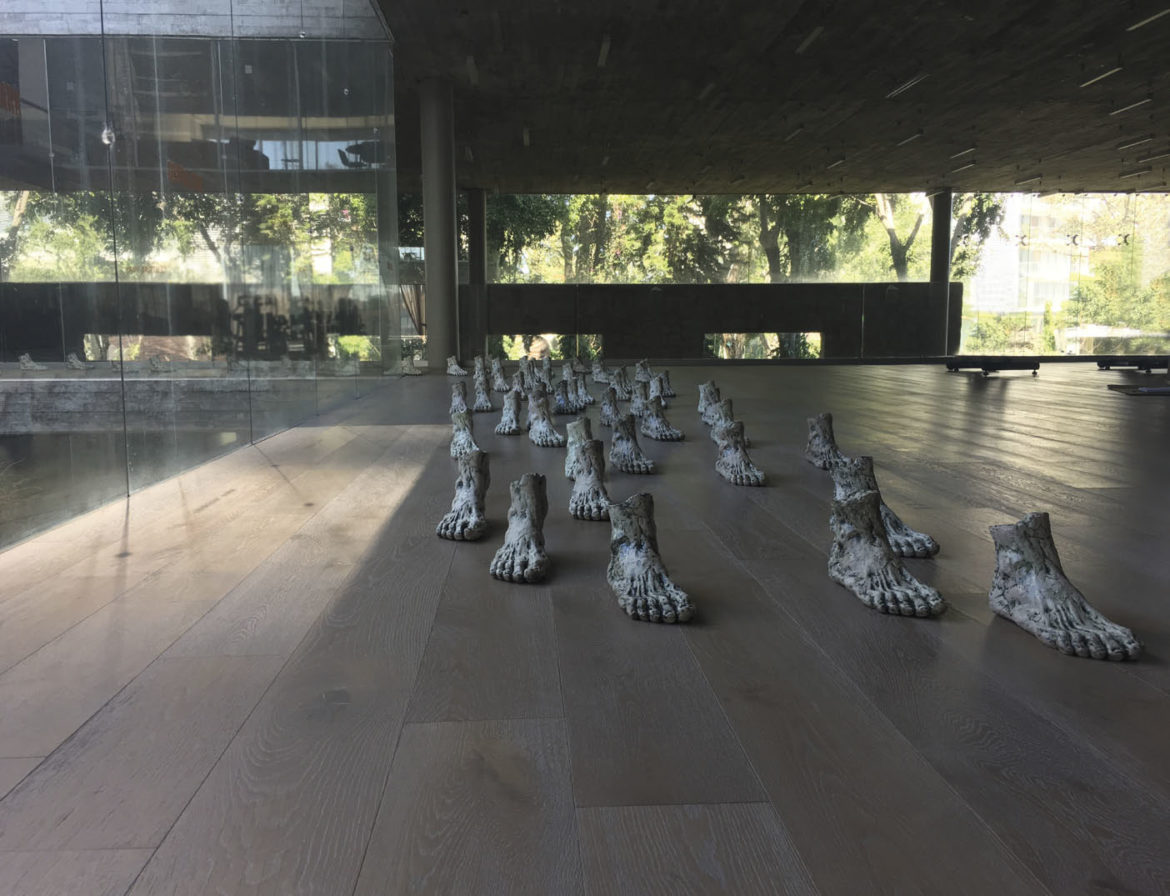 The French painter Georges Rouault had good reason when almost at the beginning of one of his few books he pointed out that the artist, even deprived of the required material means, may travel to any point of space (and of time, I can add) because he has the invaluable treasure of his imagination, which takes him anywhere thanks to the means provided by his inspiration.
In a culture that tends to the conventionalism that narrow peoples’ lives and vision, the creative line of Rafael Miranda San Juan is a huge breath. His biography is full of moments that have consolidated in
him a very distinctive professional training. His sculptures are the result of an intensive creative fertility. His life has to do with his work. Both are the two sides of the same coin: of a life tied to the commitment of living it in great depth.
The human body is the target of this artist’s creativity and talent. The skin becomes the surface where he finds raw material for his works. Digging into the different “accidents” of the human figure, he stops to make us think and interweave a series of concepts, ideas and figurations; abstractions that capture the spectator with the ambiguity of the images.
Rafael belongs to that type of artist that polarizes his form of aesthetic construction using sculpture in its open sense. He likewise appeals to nature itself (particularly human nature) as a resource of symbolical resurrection, while using corpses and real skeletons to signify and design the meaning of his proposals. An undoubtedly anthropomorphic element acts in him as statement of perceptions and social valuations that tell about death in life and of life in death, not only with regard to scatological situations and daily losses but also in a search for the spiritual and poetic that enables to transcend fossils or bodies preserved in formaldehyde, to refer tangentially to the immortality and persistence of human beings. What at times seems to be a game with deadly evidences affirms a vocation for the rigid carnality, sculptural in its forms, installed in the spatiality beyond the possible interest of pathologists and anatomists. With the hands of both surgeon and artist he recreates the state of finite existence and operates almost as a demiurge who grants new life to what ends, turning it into trope and emblem of a constant search in pursuit of granting a life in art to what no longer exists in terms of functionality and biology.
Rafael breaks the normal codes in his urge to codify them as part of
a discourse that takes up again ancient ceremonial experiences, post- modern keys, gear and design processes, receptive variables, and a sort of exchange between what no longer is and what continues to be. He refuses to consider death as finished existence, as fatal destiny. He stands on the side of what lives and grows; he reaches the “kingdom of beauty” and contemplates his vital environment with a distinctive paleontological vision. Like the Leonardo Da Vinci, who studied corpses to find out the secrets and measures of humans, or like Francisco de Goya in his observation of the fallen in the scenario of war, he has attempted to penetrate the organic structure, the machine we are, with the purpose of better understanding and revealing to others our nature, where we come from and where are we heading. But it is a search into the destiny and deconstructions of the natural sculpture that characterizes us, an equivalence with the fate of history, society, psychology and even politics, frequently transformed into irrecoverable skeletons.

BEYOND THE SURFACE
There’s more. Dissecting the representations with a “sharp (visual) scalpel”, we will discover feelings and realities beyond the surface that accumulate in his pieces or parts of his pieces that, like a huge puzzle build a story for us or for the human being in their bodily ensemble. He searches into the anatomy of Man, making a sort of X-Rays of humans, but “visualizing” the many ghosts that frolic under the surface of reality.
In his particular case he approached the road of art through the human body. It was his closest reference, the well known and main the sediment of my Life character of his stories/sensations. He then took by the hand the ceramics that has been linked to human beings since the beginning of their history on Earth. There is an interesting connection bet- ween those two elements. And he has employed clay because it is a primitive material; it has ac- companied us since the initial steps, and it was in clay that the first generations molded art. It is like an eternal trace. Other materials followed, stronger for his creative purposes. They all mix in his recent production, like an action field of situations/feelings.
From the human body he singles out parts, pieces, fragments that, if put together, make up man and woman. They are indefinite spaces of some parts, and then the imagination begins to play a role, to compose and decompose in the mind what is and what is not. With lack of definition and ambiguity, Miranda San Juan delivers keys; he wishes to tell us without great detail, but a whole world of thoughts and ideas fit inside. “The essence of things sometimes is in a detail”, his reactions seem to cry out. All that to make us think and to make us combine our sensations of what could be.
He reinterprets the constant element that links expressionism in
all its forms: a figuration outlined with strength and openness. A large format, the sensual curves, the textures, and the closed forms (ge- nerous and wide at the same time), are at first sight the distinctive features of his vocabulary. Firm and strong incisions on the surfaces come to welcome us and initiate us in an experience of the origins.
His work in general is a catalogue of experiences. He manipulates diverse historical backgrounds; references to the ancient classics are to be noted in their formal aspects; expressionistic features; he viola- tes the limits of sculpture and opens roads to installation. In his interest to make the spectator feel the present in his creations, he has the intention of making them ever more real and alive. His main purpose is to bring out the hidden feelings and above all, to speak, shout the human thoughts at the spectator. Added to it is that marked tendency of the artist to bring about a catharsis in the public and in himself. He does not want anyone to remain distant to what is happening when making contact with his pieces… 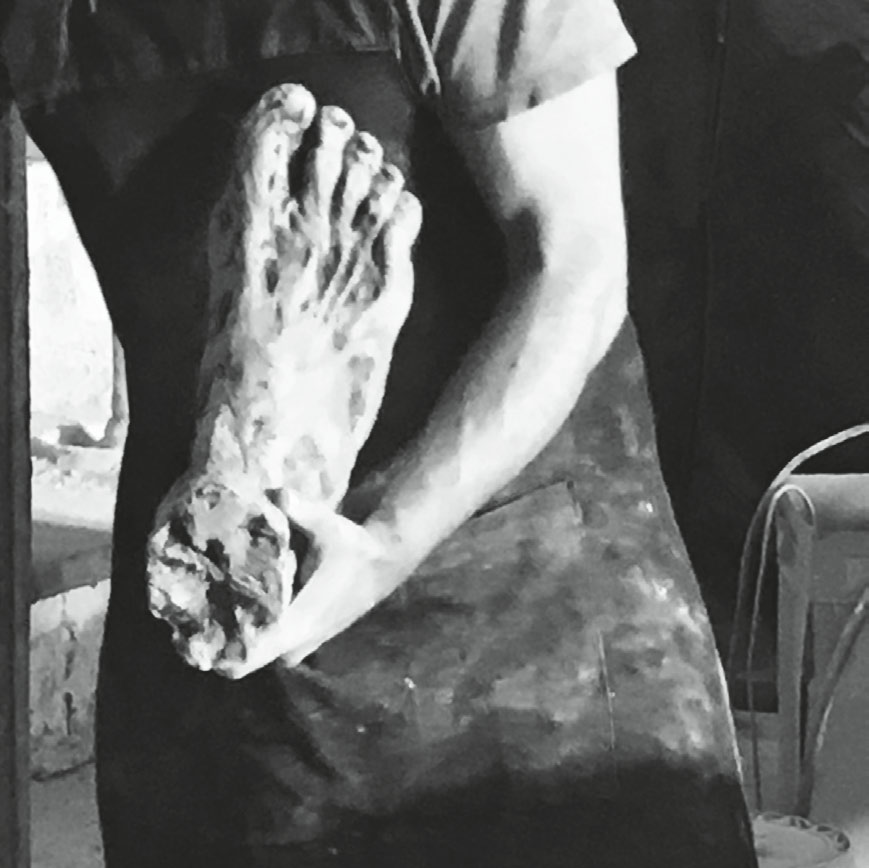 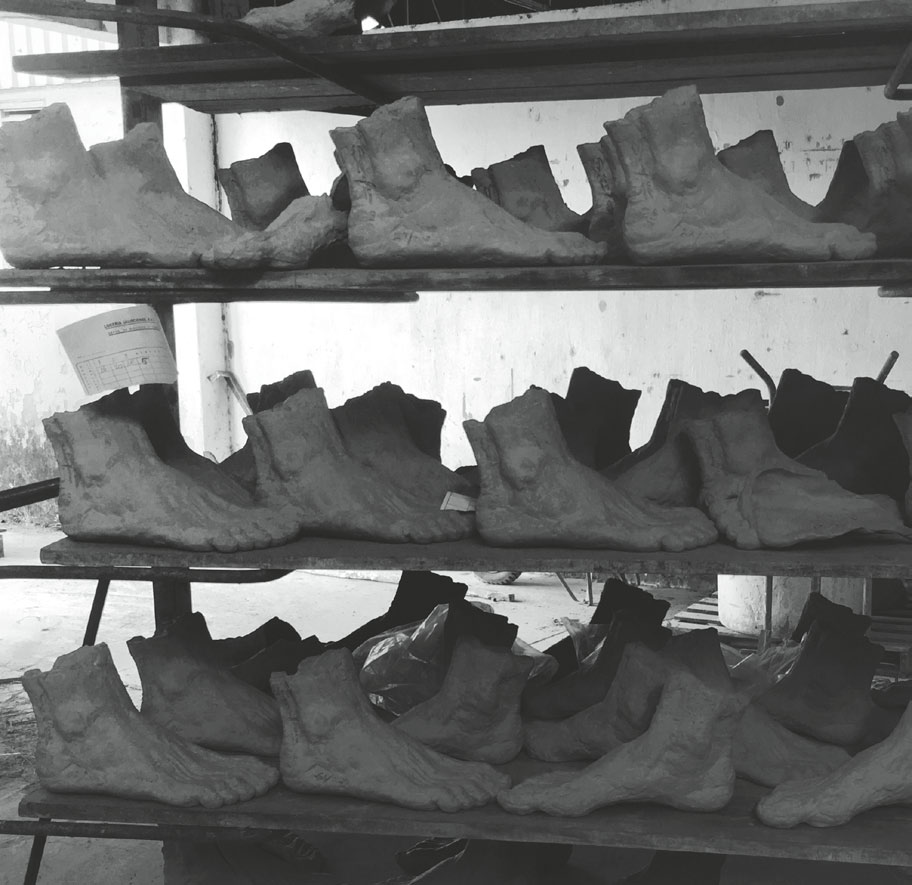 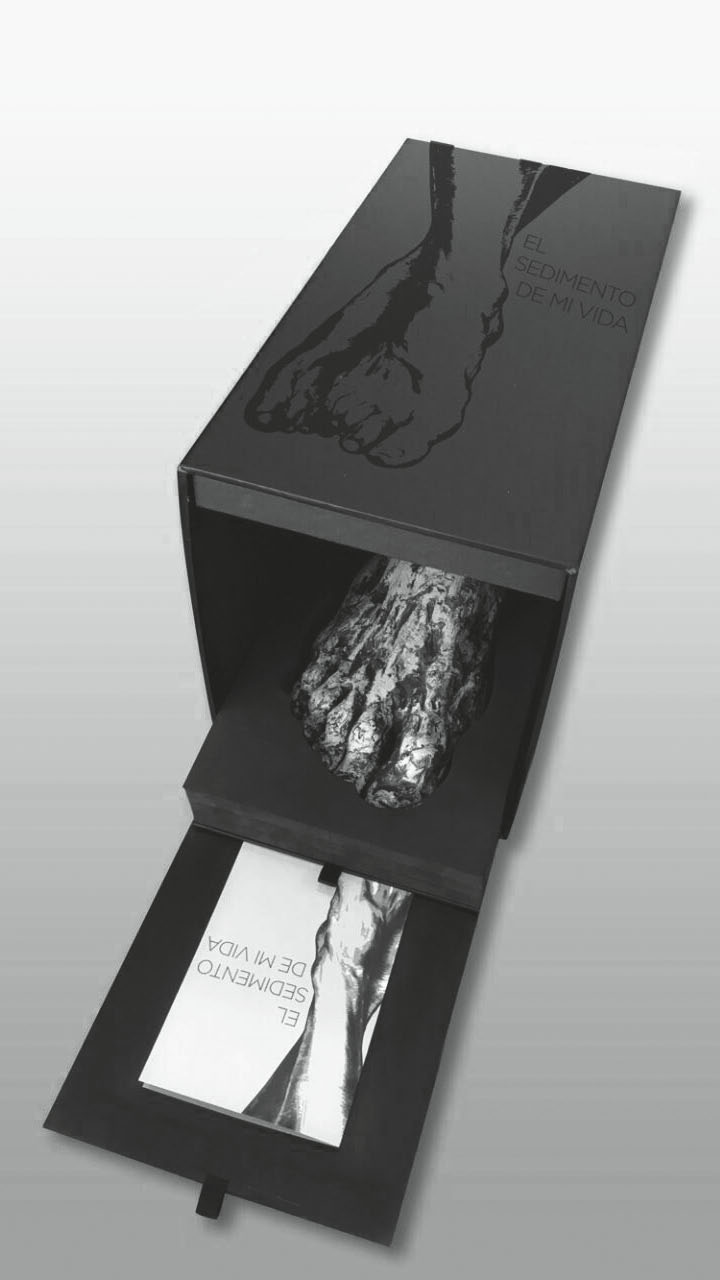 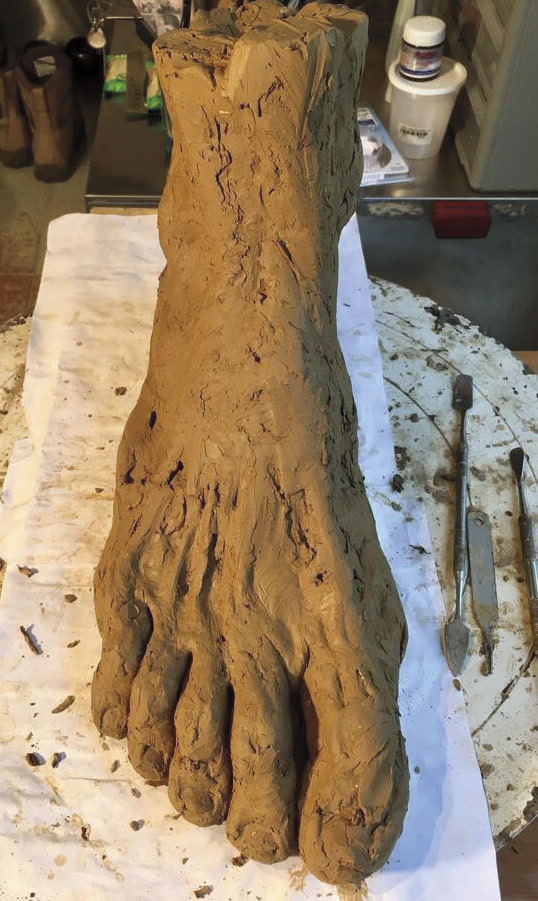 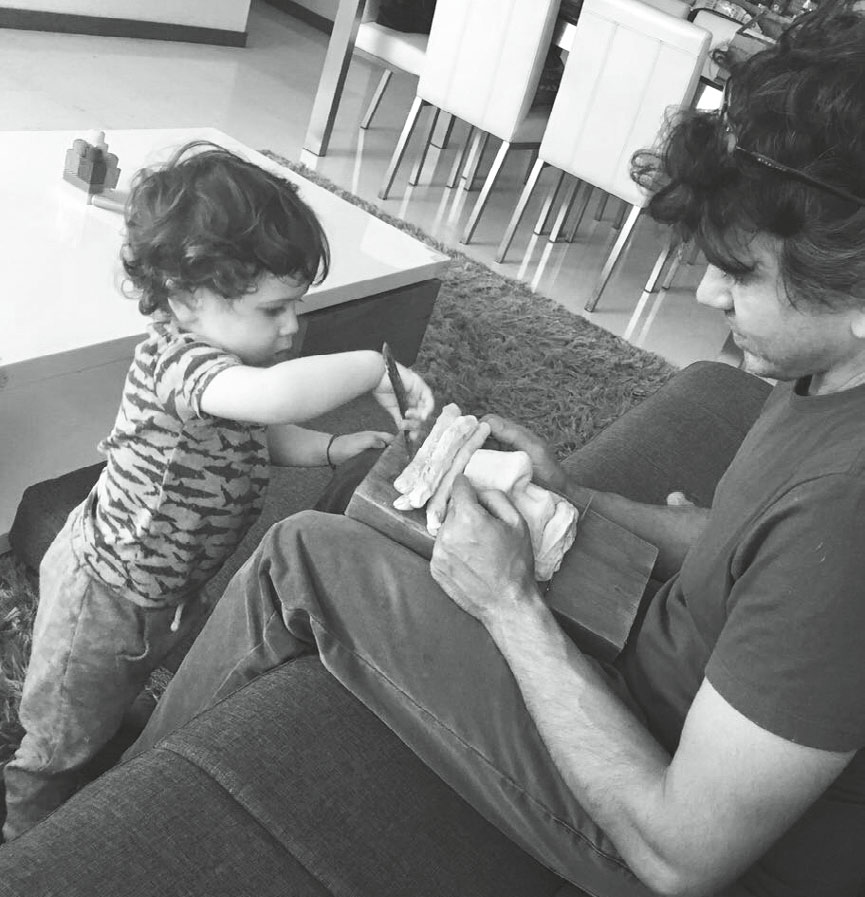 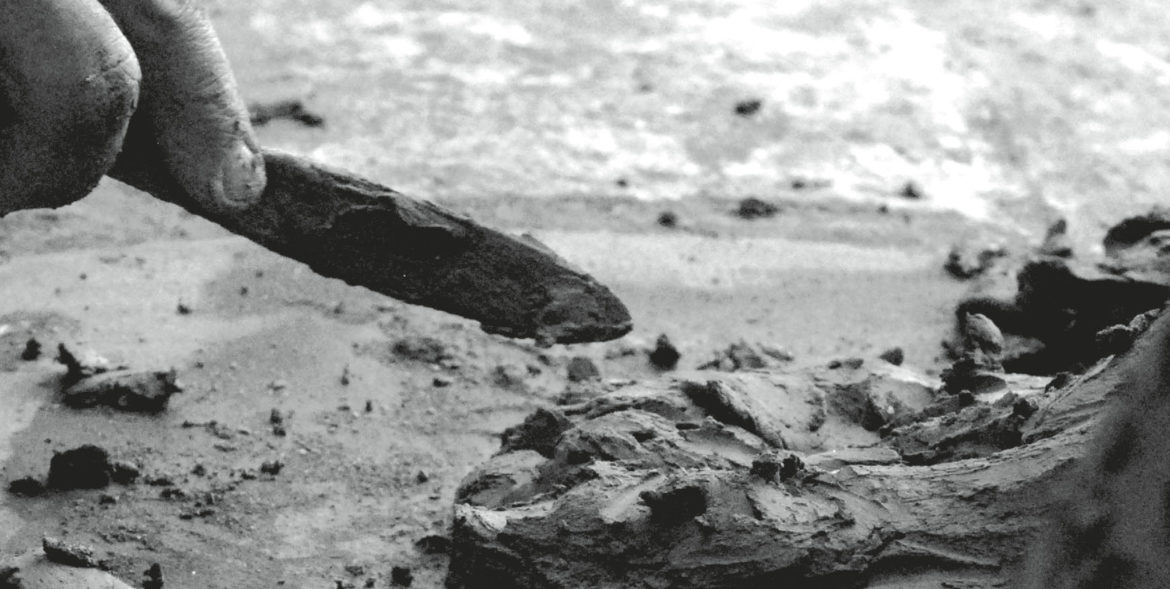 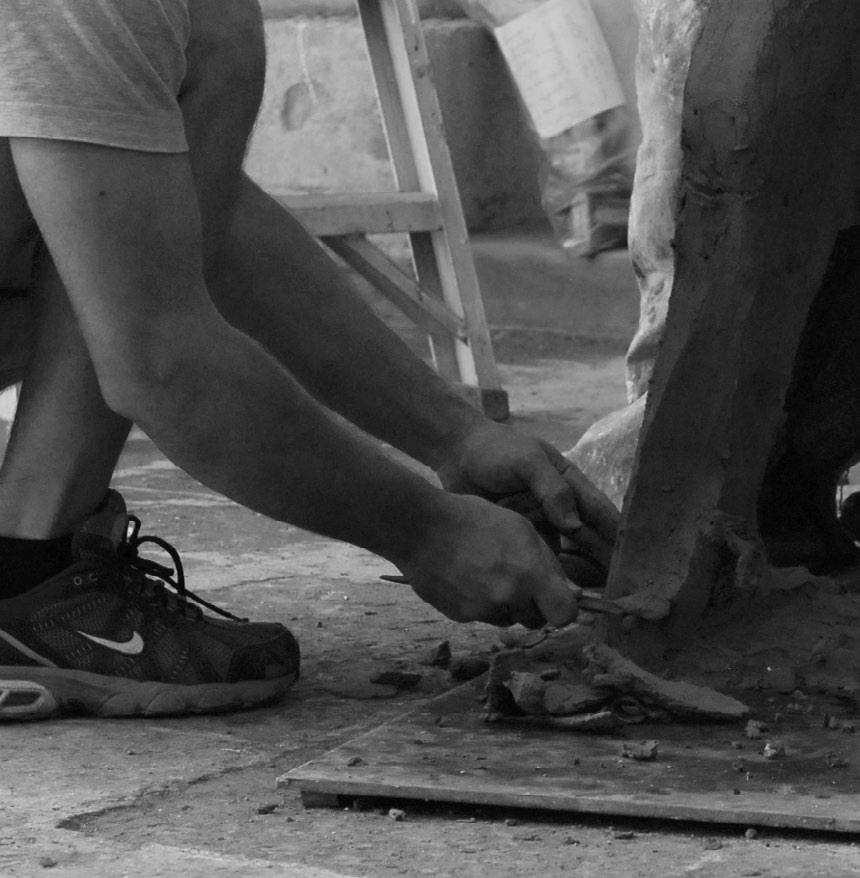 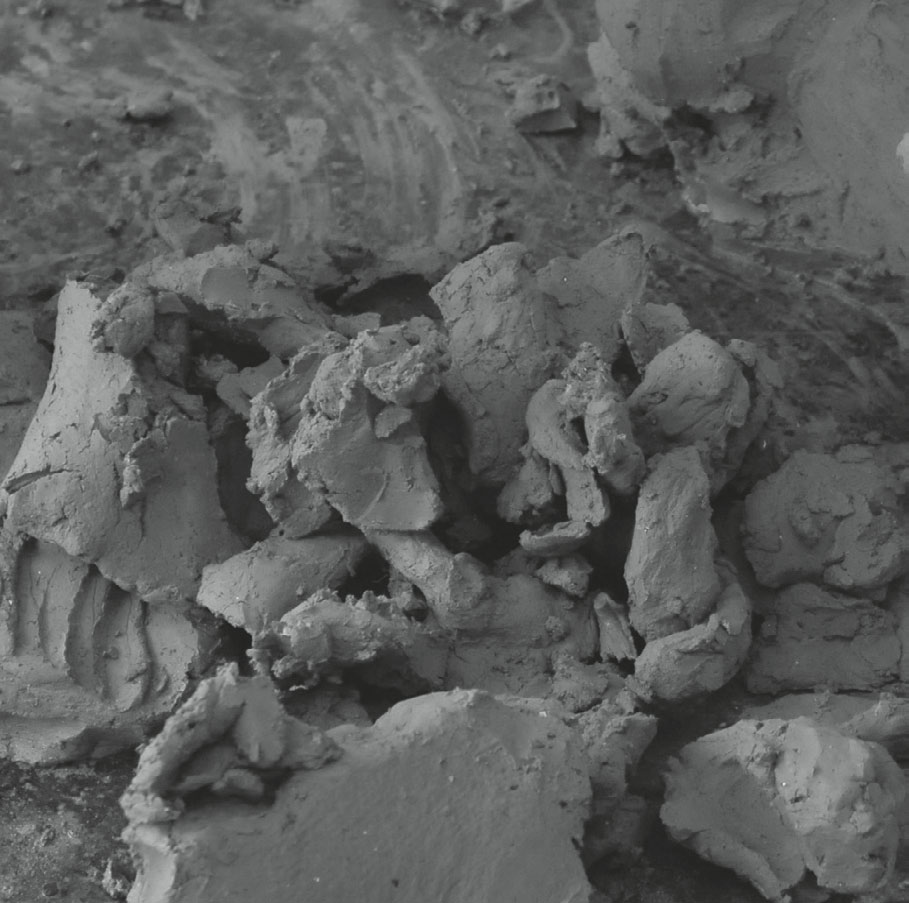 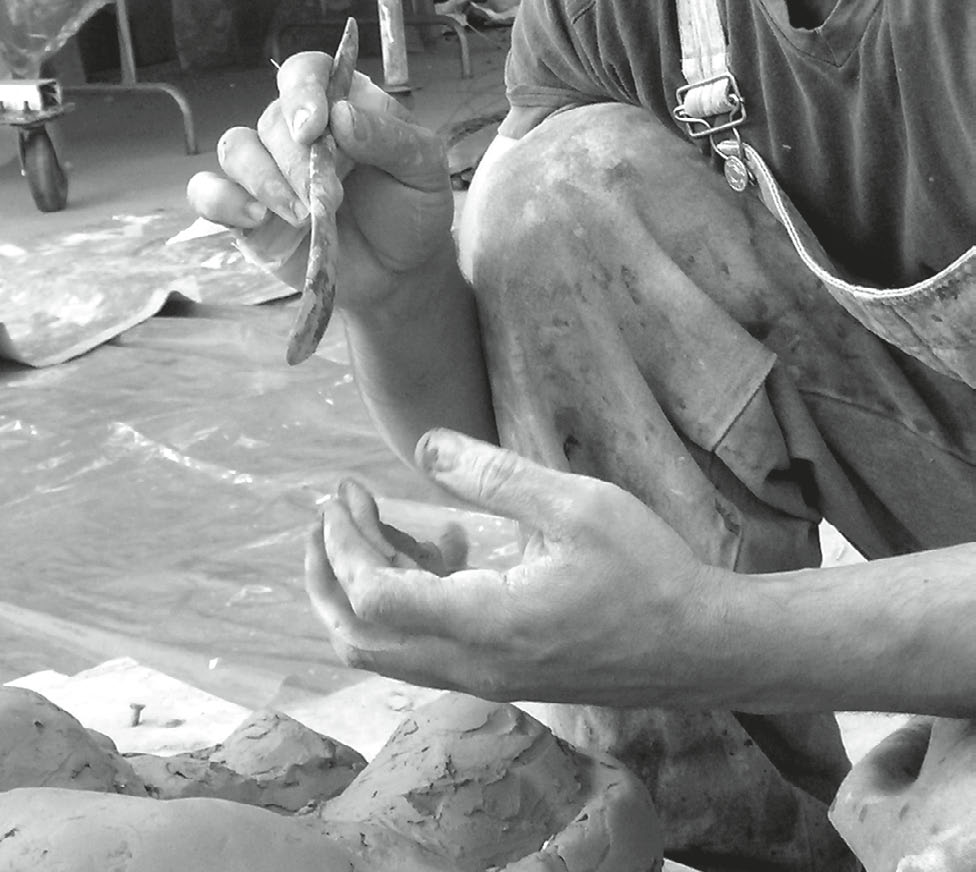 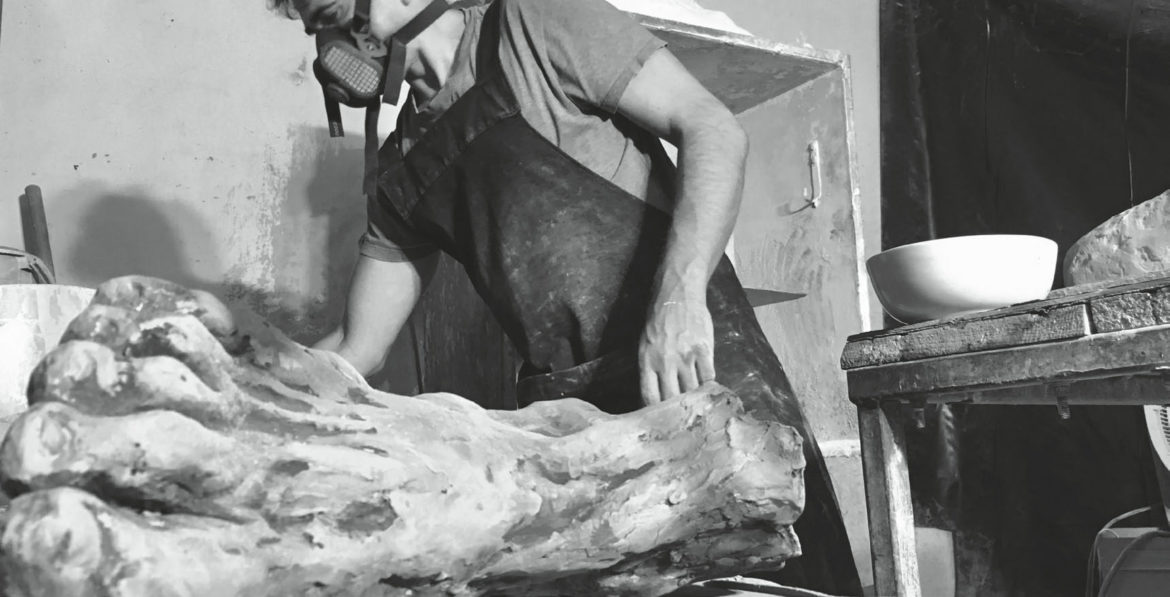 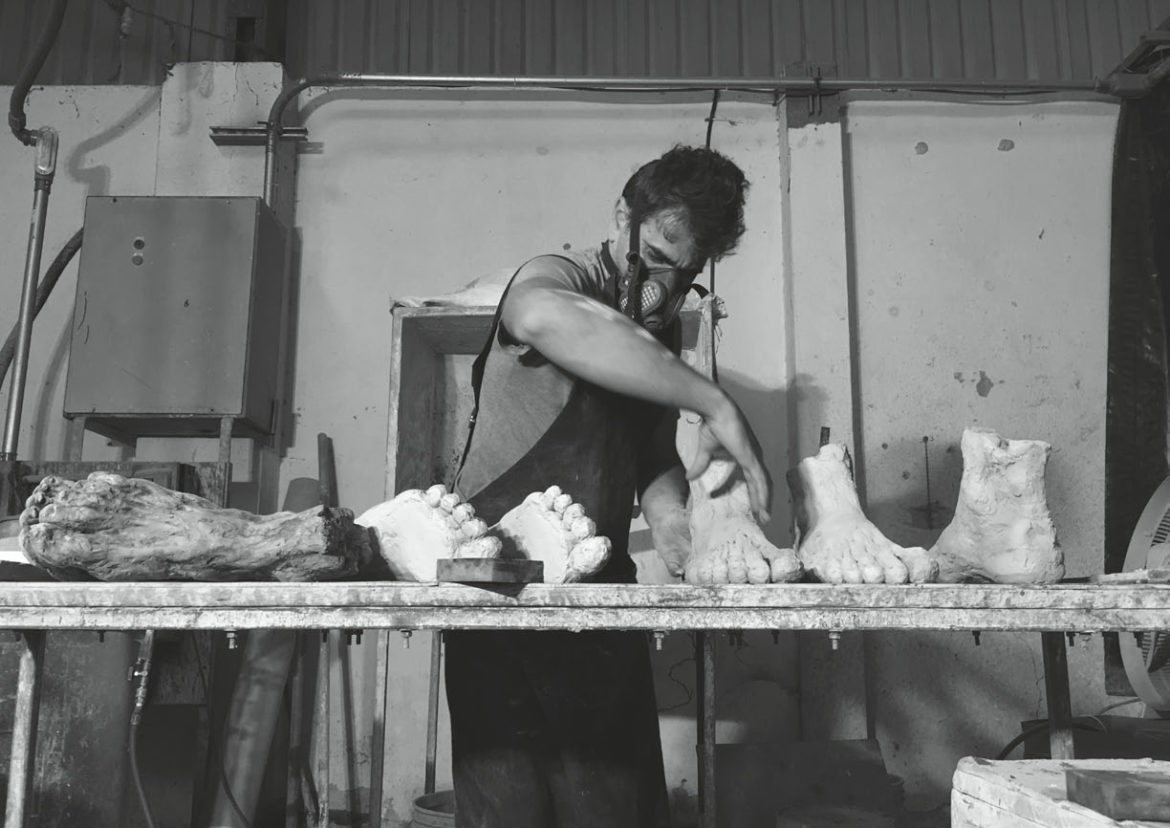 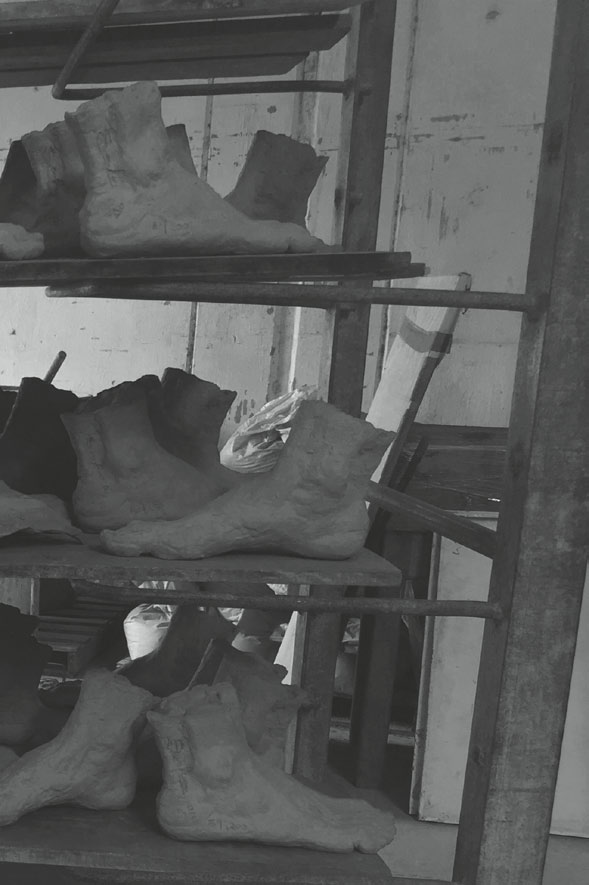 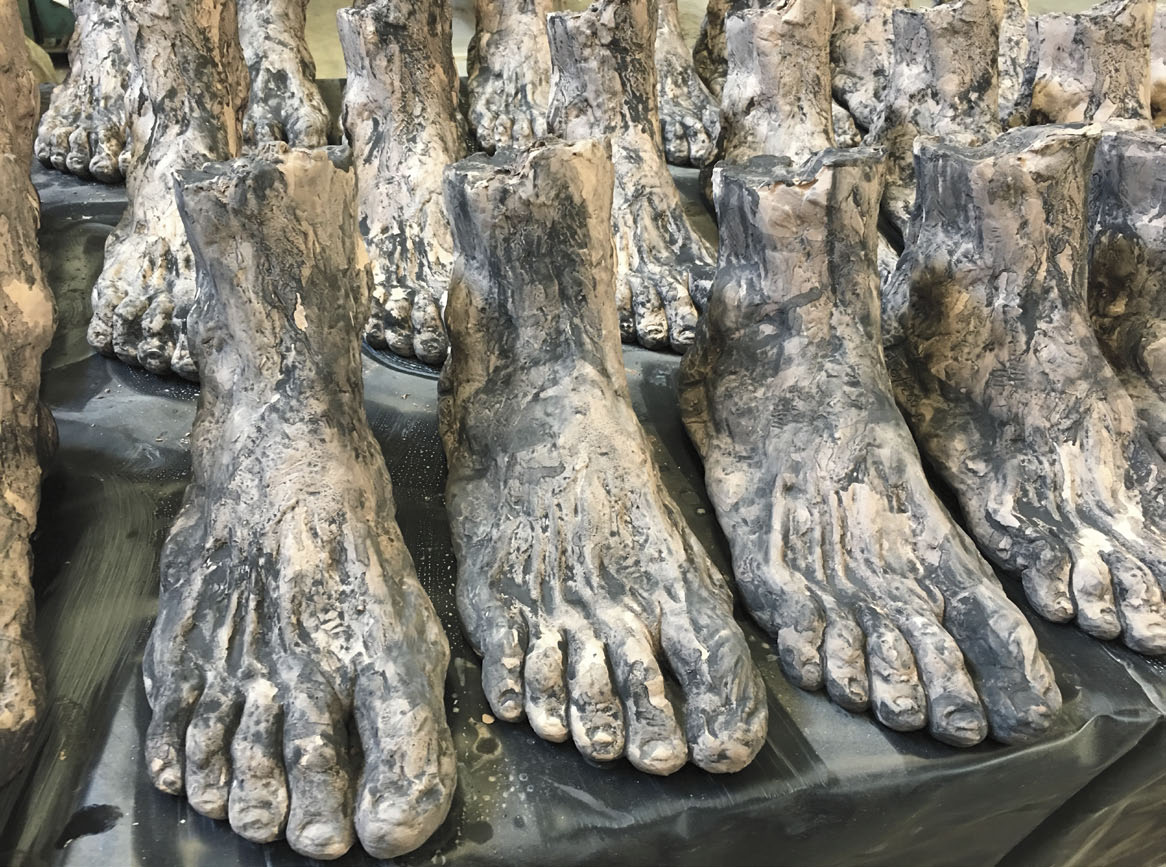 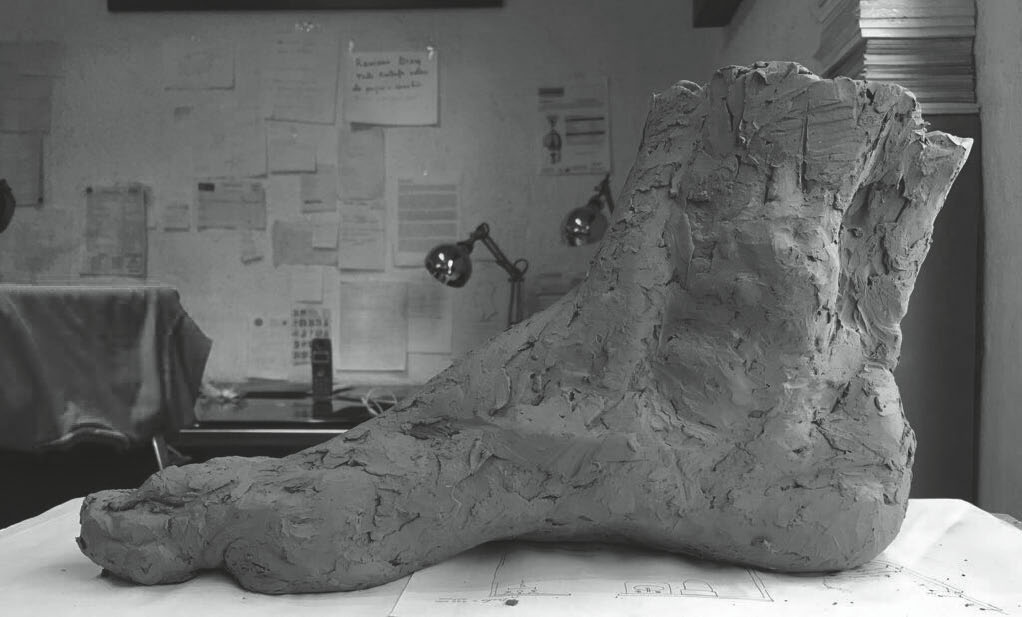 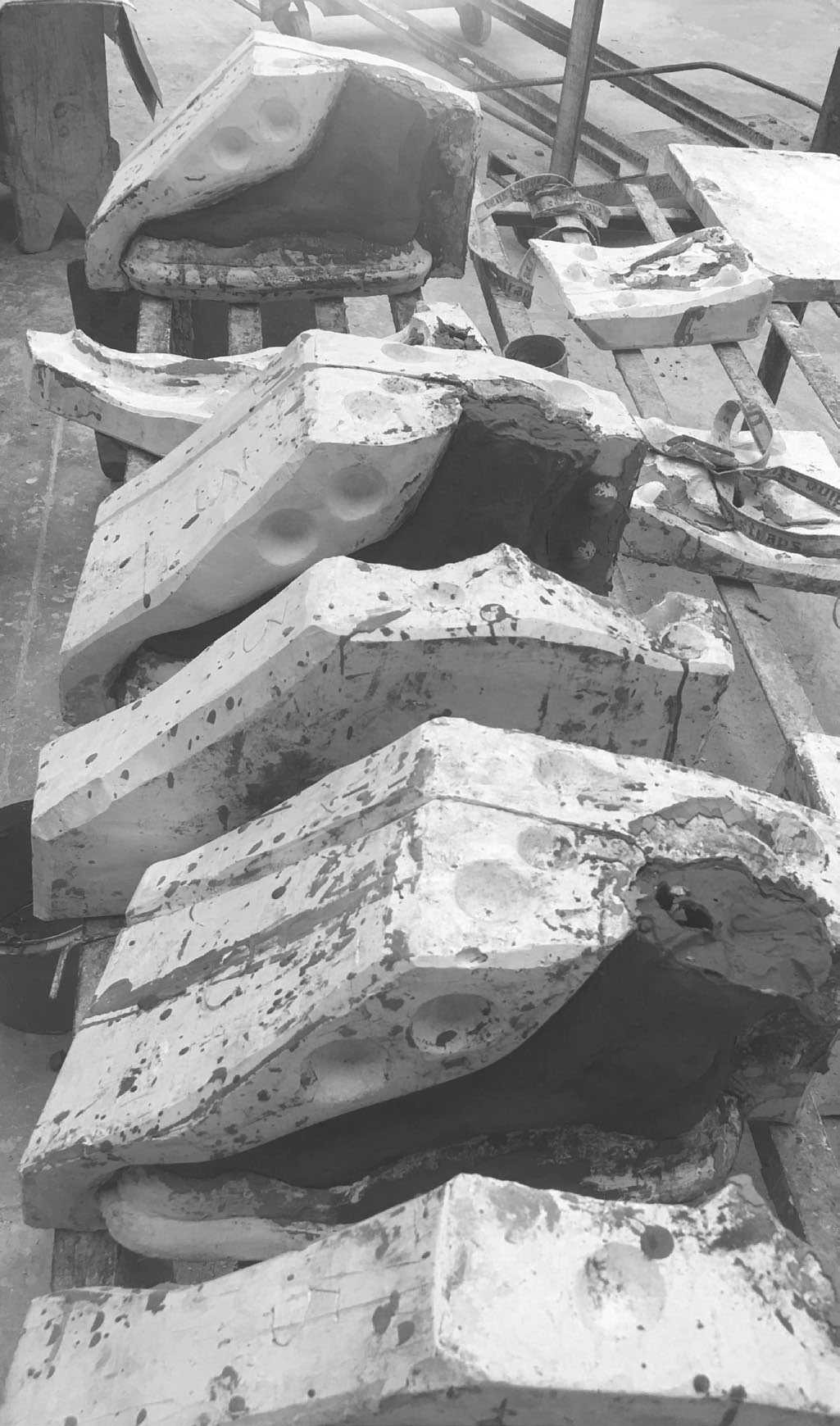 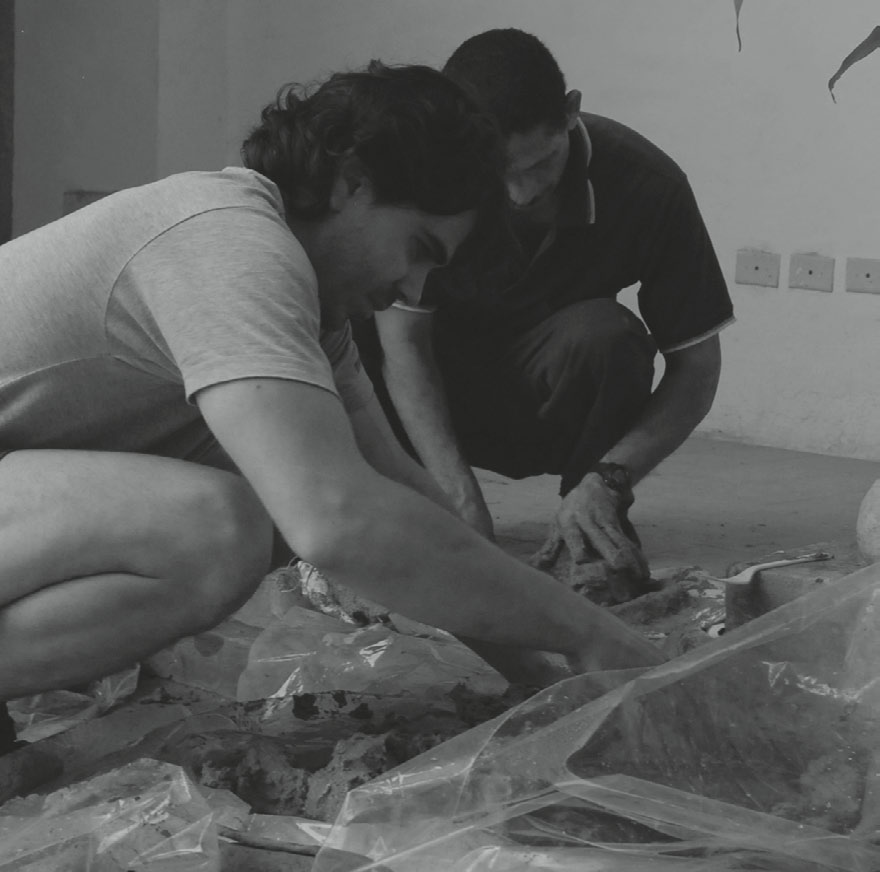